plantarwartsare benign growths of epithelial cells in the form of small growths caused by the human papillomavirus. These manifestations are located directly in the support areas of the foot or toes.

A wart is a cutaneous viral disease caused by the human papillomavirus.

There are about a hundred varieties of this virus. They can enter the human body and not manifest for a long time, thanks to the protective properties of the body like:

The risk of contracting human papillomavirus depends on the following factors:

70 - 90% of people are carriers of the human papillomavirus; however, whether or not warts occur depends on the state of immunity. People whose body resistance is reduced are more prone to the appearance of warts. In addition, the risk of developing warts increases when the body is affected by adverse factors (for example, stress, fatigue, insomnia, poor hygiene), which lead to a weakened immune system.

The papilloma virus can be infected by contact with a person with warts, for example, by shaking hands, common items (towel, slippers);

There are the following predisposing factors for human papillomavirus infection:

Human skin consists of the epidermis, dermis and subcutaneous fat. The human papillomavirus, penetrating the skin tissue, affects the basal layer of the epidermis. Subsequently, when multiplied, the cells affected by the virus rise through all layers of the epidermis and are located in the superficial stratum corneum of the epithelium, manifesting themselves externally with rough and keratinized skin. 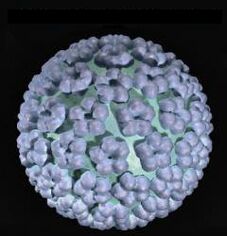 HPV is an infection of the papovavirus family that affects the mucous membranes of the organs (usually the genitals), as well as skin epithelial cells. The papillomavirus contains DNA (deoxyribonucleic acid), which, when introduced into a cell in the human body, causes it to produce new viral particles.

All types of HPV can be divided into two groups:

Note:the oncogenic properties contribute to the formation of malignant tumors.

Today, there are more than 100 types of human papillomavirus. Plantar warts, as a rule, are caused by the first type of HPV, in some cases their formation can cause the second and fourth types (non-oncogenic papillomavirus).

HPV is commonly found in all people who have sex. Every eight out of ten people are infected with this virus. Of all HPV types, 6, 11, 16 and 18 are distinguished as the most dangerous. These types of HPV can cause papillomas, condylomas and cancer.

Symptoms and how are warts on the feet

The human papillomavirus, penetrating the tissues, can be in a passive or active state.

Removal of warts from the sole 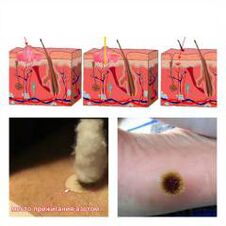 Currently, there are many effective and safe treatments for plantar warts. However, it should be noted that, in some cases, reliable wart removal is complicated by the fact that the human papillomavirus penetrates the deepest layers of the epidermis (in the basal layer).

The treatment of a wart is necessary if:

There are the following methods for removing plantar warts:

This method involves exposing the wart to liquid nitrogen at a temperature of minus 196 degrees. Cryodestruction is characterized by the fact that when the wart is frozen, the area of ​​the skin affected by viruses is destroyed, followed by the stimulation of the body's immune forces. However, it should be noted that if the wart appears and exists for up to six months, the removal efficiency is 84%. While the effectiveness of removing warts that have been around for more than six months is reduced to 39%.

The free-destruct procedure can be performed:

Research has shown that the aggressive method of freezing the wart is more effective than the conventional method, but the downside is that it is more painful.

After removal of the wart at the site of exposure, there is hyperemia (redness) of the skin, followed by the formation of edema. A few hours later, a blister forms in the affected area (may contain hemorrhagic or serous fluid), and about six to seven days after the bladder has dried, a crust forms in its place, which disappears on its own in two weeks.

Removal of warts with a laser beam is one of the most common treatment methods today. This method is characterized by cauterization layer by layer of the affected area, which allows to control the depth of the exposure. In addition, when removing a wart, the laser beam simultaneously welds the vessels, thus preventing the development of bleeding at the site of exposure.

There are the following laser coagulation methods:

After laser treatment, a crust forms on the affected area, which disappears on its own in seven to ten days. It is not recommended to tear off the crust and also to lubricate with something (ointments, creams, alcohol solutions). In addition, in the first days after the procedure, water should be avoided at the exhibition site.

A plantar wart is exposed to a high frequency current. Cauterization of the affected area should be done under local anesthesia. Thanks to a coagulation loop applied to the affected area of ​​the skin, an electric current is applied to the wart, which leads to its death. In addition, the action of high temperatures leads to the welding of the vessels, which prevents the development of bleeding.

After the procedure, a dense crust forms at the exhibition site, which disappears on its own in ten days.

This treatment method consists of using a special electrode that emits high frequency radio waves (3, 8 - 4, 0 MHz). Exposure to high temperatures in the plantar wart causes the cells affected by the papilloma virus to evaporate. In addition, due to the cauterization of blood vessels, the use of this method prevents the development of bleeding. After exposure, a crust forms on the affected area of ​​the skin, which disappears on its own in seven to ten days.

Contraindicated during the healing period:

This method is characterized by removing the wart with a scalpel under local anesthesia. After excision of the affected area, stitches are applied, which are removed after seven to ten days.

General principles of caring for the affected skin area after wart removal:

Note:In case of complications (inflammation of the affected area, prolonged scarring, scarring) after removing the wart, you should contact your doctor as soon as possiblefast as possible.

For all treatment methods, the contraindications for the procedure are:

Treatment of warts without surgery

For simple and superficial plantar warts, the use of traditional treatment methods is recommended.

Currently, celandine is also used effectively in the treatment of plantar warts. This plant has a medicinal yellow orange juice.

Celandine has the following medicinal properties:

In the treatment of plantar warts, fresh celandine juice is used, which must be rubbed on the affected skin two to three times a day until the warts disappear completely. Before applying celandine, it is recommended to steam your feet well in hot water and remove the keratinized part of the wart with a pumice stone.

In the treatment of plantar warts, celandine has the following therapeutic effects:

To improve the effectiveness of plantar warts treatment, the following recommendations should be observed: